That's the Power of The Home Depot 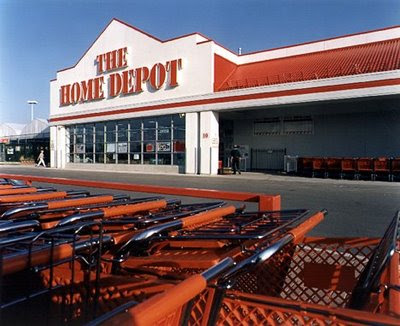 You might not have known that I work part-time at The Home Depot. I started working there at the end of August. I've never worked in retail before, and I'm enjoying it. I realized last week that it had been almost two months since my last post, so I promised myself a week ago that I would blog about whatever might happen the following week. I now fulfill that promise.

I work in flooring. Mostly, I talk to people all day about how to lay tile, how much it will cost them to carpet their house, what they should use to clean their laminate and why they should never put solid wood down in the kitchen. This past week, I did all of those things, but the noteworthy experiences happened outside department 23.

On Monday, a customer needed help finding picture hangers, so I took her to hardware and pointed them out. Then, as I made my way back to the flooring department, another customer reached up and touched my elbow. I stopped and she whispered in my ear, "You might want to watch that guy over there. He's acting drunk and reeks of beer." I thanked her and walked over to the man at the end of the aisle. I asked if he needed any help finding anything and he responded with a "No, thanks," that smelled like a warm draft from a pit of vipers writhing in crude oil.

Yes, we got thiefed. Since we'd be fired if we tried to stop the guy, all we could do is watch him and wait for a manager to come. No one came in time. He just walked out with drawers full of merch and we had to just watch him go. Thiefed.

The next big event happened on Tuesday. I went over to the kitchen and bath area because I heard someone raising their voice. It turned out to be a customer arguing with Kathy in kitchens about what product to use on a piece of granite. He somehow came into possession of a two inch thick slab of granite that he'd been using as a turntable. He was not satisfied, however with the inconsistency between the polished look of the top of the granite and the unpolished cut around the edges of the slab. Kathy told the man he should buy a granite polish to make the sides look right. He as convinced he needed to "make the sides wet," as evidenced by his repeated action of licking the side of one of our sample pieces of granite.

Kathy was getting nowhere, so I brought the man over to the flooring department and tried to explain to him that he needed to buy the polish. In the middle of my spiel, he saw a $20 bottle of sealer and became fixated on it, convinced it was he product he needed. And he kept licking the sample granite.

Finally, he said he knew he was right and he was going to buy the $20 sealer. "Ok," I said. Then he started to open it. I told him if he opened it, he would have o buy it, because we couldn't sell an opened hazardous material. He nodded really hard and said he just wanted to show me that he was right. You know what happened. He opened it. He was wrong. Then he put it back on the shelf and left. And he took the granite sample. Thiefed.

Finally, on Wednesday I was cornered by a lady on a Hover-Round who had just bought two cans of paint for her daughter's house. She started talking and just wouldn't stop. I learned she was 85 years old with a boyfriend who was a nice guy, but not as fun as the man she dated thirty years ago who took her fishing in the ocean, but that guy turned out to be a little scary, which reminded her of her traumatic childhood in which she was thrown in the cellar by her om's boyfriend and left for hours and hours and hours and hours all by herself for hours and hours and hours and now this post is starting to resemble our thirty minute conversation so I'll stop here.