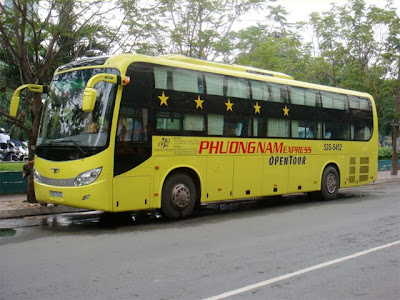 No, I'm not scarred for life, but that little Vietnamese boy probably is.

Ok, I realize that is a scary first sentence in a blog entry, but hang in there. You might already know that Kris and I have been on winter break from our classes. We chose to travel with 9 friends though Southeast Asia. We had a great trip and had enough experiences to fill several blogs, but there was one time in particular, on our last day in Vietnam, that just has to be shared.

After spending nine perfect days in sunny Mui Ne, we decided to move on to Ho Chi Minh city, the capitol of Vietnam. Before catching our sleeper bus at 2pm, we had an early lunch at our favorite little diner where I branched out and decided to try the "beef with noodle" instead of my usual "tuna fish with samwich." Six hours later this would come back to haunt me.

When the bus came at 2, I settled in to a seat in the very back of the bus on the second level of seats. This was the last of about six similar bus rides we took as we leap-frogged from city to city through Vietnam. We always chose seats in the back, where most of us could sit together. I liked the seats on the top because the view was better and because I always wanted bunk beds as a kid. Not very popular for one-child households. Anyway, I found my seat and spent the first three hours finishing a crummy book about hidden clues in the works of Shakespeare, a knock-off of the Dan Brown novels.

One of the drawbacks of the back of the bus is that it is very bouncy and swervy. It's the best place in the bus to get carsick. Especially if you're reading. So after I finished the book and my stomach was feeling rough. I thought I was just a little bit car-queasy, but I found out later that night that I was poisoned by that Vietnamese beef.

As the need to hurl intensified, I was thankful that my seat had direct access to the window. I, like almost everyone else, hate vomiting, so I was taking deep breaths and trying hard to beat the beef. I actually made it pretty far. We got all the way to Ho Chi Minh. We got all the way to the street where the bus stop was located. We even stopped in front of our destination. Then the driver threw it in reverse. He was only backing up enough to parallel park, but it was enough to put my stomach over the edge- and my head out the window.

So I puked. And three things made it amazing:

1. Altitude. From the upper-deck window of the bus, mouth to ground was a good fifteen feet. New personal record.

2. Audience. Although my traveling companions inside the bus had no idea all this was happening, I had a huge audience outside the bus. Only a few feet away, one of the workers was guiding the driver. He might've been splashed on a little. At a distance of about fifteen feet, people were standing on the sidewalk with looks of disgust/horror on their faces. I tried to make it as enjoyable as possible for them, smiling and waving between convulsions, but...

3. Sheer volume. Upon viewing the carnage, I heard people make comments: "Oh my word." "Never in my life." "That is the most vomit I have ever seen." Needless to say, my ego was stroked a little.

Now this post has gone on too long, but I need to tie up the loose end- the Vietnamese boy. He was standing with his mother only a few yards away. While it took everyone else a few seconds to figure out what was going on, this child was locked in from the instant my head came out the window. I distinctly remember making eye contact with him as the impurities fled from my body. Then he reached for his mother's hand and opened his mouth and screamed. Then he inhaled. Then he screamed again. I'm no expert, but I think moments like these are what causes children to have issues. I'm sorry little Vietnamese boy. So sorry.
at 21:48