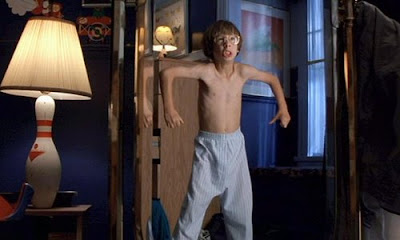 A few nights ago we sat around a dozen empty dishes reflecting on 2 Corinthians 12 and trying to make sense of the phrase, "The power of Christ is made perfect in your weakness."

The answer is found in the 1994 family comedy, Little Giants.

I know you've seen this movie and I'm positive you remember in detail the final sequence, in which the rag-tag Giants face off with the muscle-bound, peachfuzz-bearded, fire-breathing pee wee force, the Cowboys. As you know, the Giants were pummeled in the first half, leaving them in the locker room at halftime with a 21-point deficit and very low spirits. After a rousing speech from Rick Moranis, the Giants took the field in the second half, in which they score repeatedly and execute a dramatic goal-line stand, resulting in a score of 21-21 with 00:01 on the clock and 99 yards to paydirt. Not enough time to get in pee-wee football field goal range. Only enough time for... One. More. Play. Which play? A trick play called "The Annexation of Puerto Rico." Stunned, the Cowboys can do nothing but watch as the Giants move the ball 99 yards to score the winning touchdown. Moviegoers across the country simultaneously reach for a tissue.

Why didn't producers cast more athletic kids to play for the Giants? Why did the writers stack the odds in the Cowboy's favor? Why give the Giants a 21-point margin to overcome? Why start the final play on the one yard line? Because no one notices when strength wins or when power prevails or when the 50-point favorite wins by 50 points.

But when weakness triumphs in spite of limitations, people stand up and cheer.
at 14:31