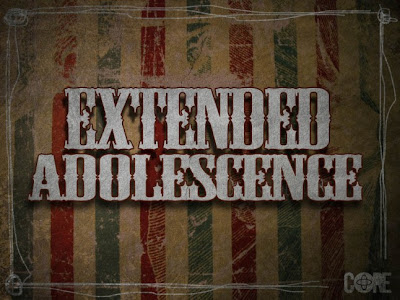 I’ve done some research lately on Extended Adolescence and I’d like to share some of the things people are saying about the culture in which our teenagers are growing up. Much of this is a summary of work done by Mark Yaconelli and Mark Oestreicher.

All you have to do is take a retrospective glance and you’ll see that Americans are “kids” longer now that they were 50, 20 or even 10 years ago. The attitudes and actions we associate with adolescence (rebellion, moodiness, lack of other-awareness) can be seen not just in teenagers, but well into the twenties and even thirties in some cases. And the upper range of adolescence is growing all the time. In the 1970s, research concluded that adolescence began at 12 and ended at 18. This is why 18 is the age of “adulthood” at which Americans can vote, join the military and marry without parental consent. Now, forty years later, adolescence begins (on average) at age 10 and ends (on average) at age 30. Some researchers suggest that eventually there will be no upper limit to the age of adolescence. Instead it will be a “lifestyle choice” that some make to never grow into full adulthood.

What researchers are learning is that adolescence is not a physiological phenomenon (related to puberty), but a cultural phenomenon. In other words, young people act this way because that is how we are telling them they should act. Want evidence? Look to the past. Your grandparents were adults who handled major responsibility at the same age that your children have to be coaxed out of bed every morning to go to school. We didn’t change that much biologically in three generations. It’s cultural. Also, a look at world cultures will reveal that extended adolescence only occurs in first world cultures that are influenced by American media. What this means is our young people are not “late bloomers,” they are just being told that they are children when in truth they are not.

So why has this happened? Others have made many suggestions that can be boiled down to three:

1. We have systematically isolated youth from the adult world.
Teenagers have very little regular interaction with adults, other than those who are paid to be with them in their culture. Classrooms are full of teens and teen culture. Youth groups are often seen as a separate church for young people.

3. We removed on-ramps to adulthood and inter-generational relationships.
The presence of adult relationships provides an opportunity for teens to see adulthood firsthand and learn by example how to accept meaningful responsibility and consequences.

This post is bunches of gloom, but there is good news- since extended adolescence is NOT biological, but cultural, we can change it. We can choose the culture in which our families will live. We can choose the culture we want for our youth group. In subsequent posts, I’ll discuss ways we can change our culture and help our teens grow into the fruitful adults God wants them to be.
at 22:54