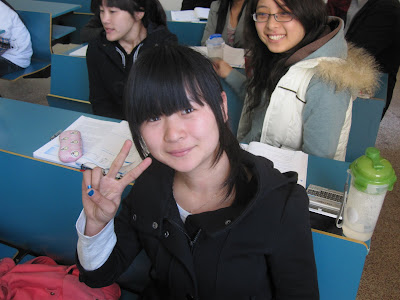 Sometimes we try to incorporate biblical messages in our classes, just to see if we get a bite or a reaction on which we can follow up. Last week I wrote a proverb on the chalkboard for my Chinese majors to read, put in their own words, and contemplate:

"If your enemy is hungry, give him bread. If he is thirsty, give him water. You will heap burning coals on his head and you will be rewarded."

After hearing some of my students try to explain the meaning of this proverb, I asked if they liked it. Most of them said yes, it was a good saying. I asked what they thought of putting it into practice by showing kindness to people who had hurt them. They said that they would try it in some cases.

Then I wrote on the board the more famous maxim,

They immediately recognized this saying and even told me the Chinese version, which also has a catchy ring to it. Then I asked them which of the two attitudes was better-- "bread and water" or "eye for eye"-- hoping there would be a breakthrough. I was careful not to insert my own opinion, because I wanted them to be genuine in their response and discover which was better for themselves. After some discussion, the class decided that it would be best to offer bread and water after the first offense, but if the person continued to hurt you, you should adopt the "eye for and eye" policy.

Finally, I decided to show them the way of Christ and see how they responded. I asked, "What would you think of someone who was hurt, but showed kindness in return? Then they were hurt again, and they continued to show kindness, over and over again forever?"

There was silence. Processing. Pondering. I had them thinking! I was excited. What would they say? Would a light bulb come on? Would they get it?

Then the silence was broken by a 90 pound Chinese girl in the back row (pictured above), who raised her fist in the air and shouted, "RUBBISH!"

Then the whole class joined in agreement. Anyone who allowed themselves to be run over time and again was a fool indeed.That's the thing about the gospel. If obeying God's way made sense, everyone would be doing it. Let people hurt me without seeking revenge? Give my hard-earned money? Take the lowest seat at the table? I'd have to be a fool to do that!

I was shocked at my student's response to God's way, but when I think about it they're right. From their perspective, someone who follows God's way is a fool. Maybe the ultimate challenge is to show people the eternal perspective. From that point of view, rather than being counter-intuitive, God's way is the only way that makes sense.
at 16:45