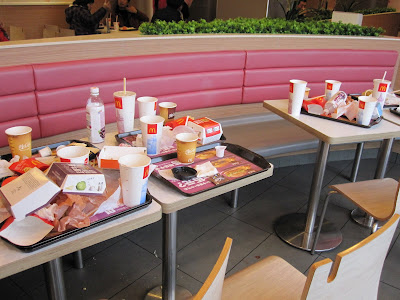 Today I took part in the most unique family meeting of my life. We broke bread on the second floor of a crowded McDonald’s in the middle of lunch hour, less than 100 yards away from a major intersection in a city of 6 million.

Long ago, a Great Man taught his followers to break bread and drink wine every week, the better to remember him. Two thousand years later, we still honor this tradition on the first day of every week. All around the world, people are doing the same thing, remembering the same person. Some are drinking wine, others grape juice. Some are eating wafers, others a modified saltine. Some have the meal in silence, others while singing a song. Sometimes people approach a table to eat and drink. Other times, men will stand solemnly at the front of a room with hands folded and heads bowed.

But sometimes, on rare occasions, a group of followers will meet in a crowded fast-food restaurant. And there, in the eye of a storm of people, they'll pour some grape juice into a few emptied McDonald’s cups, and with eyes open, heads raised, and faces smiling, will give thanks to the Father for a Great Man with a back strong enough to bear the sins of the world.