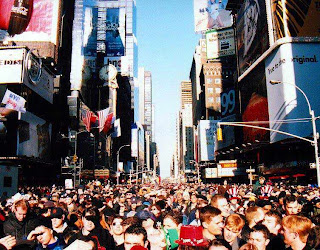 This blog post is fueled by half a peanut-butter brownie and two hours of sleep. Why? Because our pantry is currently short on traditional breakfast eats and I recently started working nights at FedEx. Dessert for breakfast is typically more enjoyable than working all night, but this morning I want to write about the latter.

I work in the heavy weight sector with a team of about fifteen people- handlers, checker-sorters, forklift drivers and managers. There are probably fifty teams just like ours working in heavy weight alone, one of many, many sectors. When I get to the airport at ten-thirty, I usually have to park in the very back of the lot and walk past about a thousand cars to get to security. After security, I get on a bus that takes me to my work area. Every workday, I ride a bus with twenty other people. You would think I might see the same people on the bus every night, but that's not the case. In three weeks- about thirty bus rides, I've seen the same person maybe twice. That's understandable when you consider the volume of people working at the Memphis Hub. My manager's manager's manager told us in a new hire meeting that at midnight, the Hub is the 17th largest city in Tennessee. So I guess I'm trying to say there are a lot of people.

Call it an "anthill" or a "bee hive" or whatever. The point is, sometimes I look up from tying down nets and see the city around me- the noise of the machinery, the smell of jet fuel, the entire floor moving with people- and I realize I am one of many. I am one of many, many different people. It's an unfamiliar feeling for me.

I realized at some point that my whole life I've been around people just like me. In high school, college, my first job out of college, and now in graduate school... the people I've worked with, studied with, and befriended have been just like me. They dressed like me, thought like me, acted like me, spoke like me, disliked what I disliked, and valued what I valued. I think I realized this by looking the contacts on my cell phone. There are about 150 names in there. I counted 5 people who were different from me. Now I'm a little bee in a hive overflowing with people from a different world. Here, people don't dress like me. They don't think or act like me. They definitely don't talk like me and some of the things I hate, they love.

Chasti is not like me. She's a single mother of four. She clocks in with me at eleven and clocks out with me around three. Then she drives an hour home, wakes up her kids and goes to her second job, cleaning houses. I think Chasti averages about three hours of sleep a day.

Greg is not like me. I also work with a fifty year-old man with four sons. They all share the middle name Greg. The oldest is a state championship football player. The youngest has ADHD and loves sci-fi movies. Greg's wife got the jacuzzi in the divorce.

David is not like me. He's a single guy from out of state. He used to work at a pet store, but likes it better at FedEx. I would call him eccentric, but he's weirder than that. He's also the brunt of everybody's jokes. I don't know what he did to get on the unpopular list, but I see people ignore him every night.

I could go on. The point is, in spite of our differences, I am making friends with these people, and the more I learn about them, the more I see that we are really all the same. We all have a story. We all have reasons for taking a third shift job. We all have people we care about and provide for. The most sobering likeness is we all have parts of our stories that are broken and and need healing. What's it like to work all day and all night to put food in your four kids' mouths? How does divorce affect a sixteen year-old boy with ADHD? What emotions are felt when you come home alone after being cracked on all night at work?

And I guess the question for me is, how can I bless these people?

Surely I could find a less exhausting way to make $800 a month. Still, I think I'll be at FedEx for a while, if for nothing else but to diversify my contact list.
at 20:25